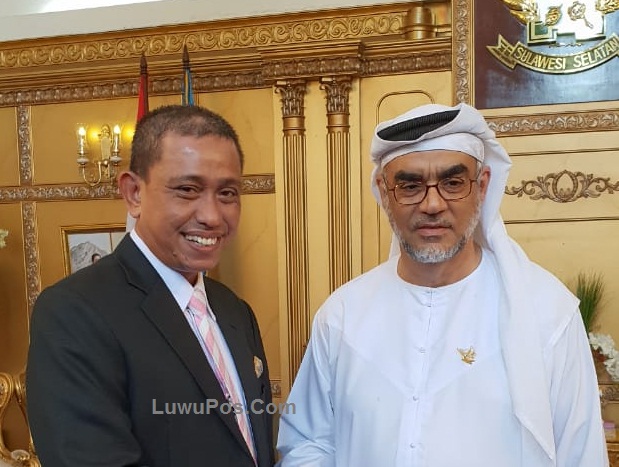 Nurdin Abdullah gave the Honorary Award in the Field of Education and Humanity to Dr. Sheikh Muhammed M.T.M Al-Khoory, who is the Chairperson of the Asia Muslim Charity Foundation at the Governor's official residence, on Saturday (9/21).

Sheikh Al-Khoory is Managing Director of the Al-Khoory group of companies in Dubai, the United Arab Emirates, which was pioneered by his father and siblings.

Some things have been done in Indonesia, with 1,570 humanitarian projects. Built 1,248 mosques, 100 orphanages, established 20 ma'had (schools) Arabic Language and Islamic Studies, four ma'had, 25 medical clinics using buildings that were not built by the AMCF foundation, but were built by other foundations.

The Governor gave an award by giving a charter and pin shaped Ship Pinisi.

After obtaining the award, Sheikh Muhammed M.T.M Al-Khoory in his remarks, expressed his gratitude and gratitude for this gift. He conveyed what he achieved, not because of himself, but the support of all parties involved.

"Thank you to the Governor of South Sulawesi, who has given this award. Also thanks to the Mayor of Makassar and the Regent who has attended, "said Muhammed Khoory.

Meanwhile, the Governor of South Sulawesi in his remarks conveyed, the award was a form of gratitude and appreciation to Muhammed Khoory, for the work and service that had been done in Indonesia, including in South Sulawesi.

"This is because there are still our brothers who care about the world of education, and other social activities. What we give is not comparable to what has been given, "Nurdin Abdullah said.

Nurdin Abdullah said, this initiative was a form of gratitude to Muhammed Khoory for bringing together Middle Eastern entrepreneurs to help Indonesia.

"Who knows, he also intends to help in the area not only in Makassar," said Nurdin who was greeted with applause from the regents present.

He concluded his remarks so that Muhammed Khoory was prayed for in a healthy condition and continued to work.

Currently Muhammed Khoory, manages and runs a group of companies engaged in the import and distribution of cars and buses, water pumps, power plants, fire fighting, waste management, and also in the property and hospitality sector.

Building five radio stations in Indonesia, namely in West Papua, Ternate, Gorontalo, Palu and Makassar. Building two propaganda markers in North Sumatra and South Sulawesi. Building 25 schools in Indonesia. Funding 174 da'i at the moment. Also the collaboration has been carried out with Makassar Muhammadiyah University since 1996.