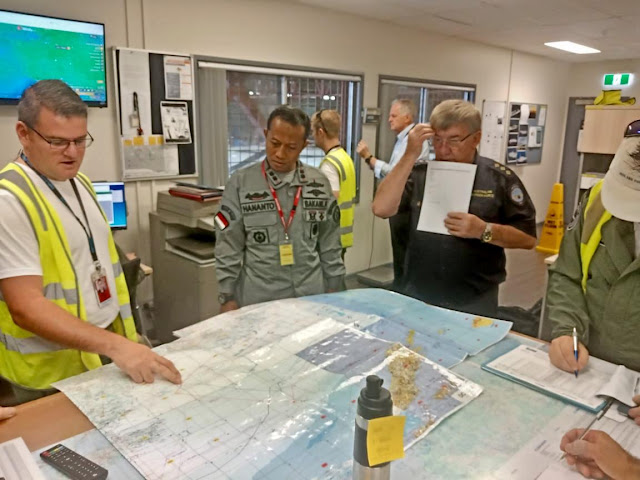 LUWUPOS.COM ■ Bakamla RI is once again collaborating with maritime enforcement agencies from neighboring countries. Operation Gannet 19-2 was successfully carried out between Bakamla RI / IDNCG with the Australian Border Force (ABF), and Maritime Border Command (MBC), in the Indonesia - Australia border region, specifically the Timor Sea, some time ago.

In addition to Bakamla RI / IDNCG, other Indonesian agencies involved were the Ministry of Maritime Affairs and Fisheries (KKP) who also sent elements.

The operation, which was held for six days (23-28 / 9), aims to enhance cooperation and collaboration in the maritime border areas of the two countries. Together with the four agencies involved, this operation also has a mission to detect, dispel and respond to illegal maritime activities. This was also done to strengthen good relations between Indonesia and Australia.

Quoting the words of the Head of Bakamla RI Laksdya Bakamla A. Taufiq R. On various occasions, Bakamla RI / IDNCG must unite with all law enforcement agencies.

"Basically, we have the same challenges in terms of maritime security and safety. It's only natural that we work together to create conditions that are safe and conducive at sea, "he said.

On this occasion, Bakamla RI / IDNCG mobilized elements of 80 meter vessels. KN Nipah-321 Island is joined by ABF elements, namely Cape Leveque, and Orca 4 KP which are elements of the CTF.

Not only that, Bakamla RI / IDNCG also deployed elements of maritime air in the form of patrol aircraft.

One of the Bakamla RI / IDNCG personnel who is the Commander of Dana-323 Island Lieutenant Colonel Bakamla Hananto Widhi, also joined as Air Rider on ABF maritime aircraft based in Darwin, Australia.

At the end of the activity, Lieutenant Colonel Hananto also visited the ABF patrol boat base which was received by ABF Commander Cape Sorell Captain Mark at the ABF Harbor dock.

On this occasion ABF Commander Cape Sorell introduced all the officers on duty, and gave an explanation of the ABF patrol boat. The explanation includes navigation, communication, machinery, and ship logistics preparation procedures.

Not to forget, also explained about the mechanism of the visit board, search, and seizure (VBSS) conducted by ABF personnel in carrying out handling of crime at sea.