Ma'ruf Amin Resigned from MUI after the Inauguration 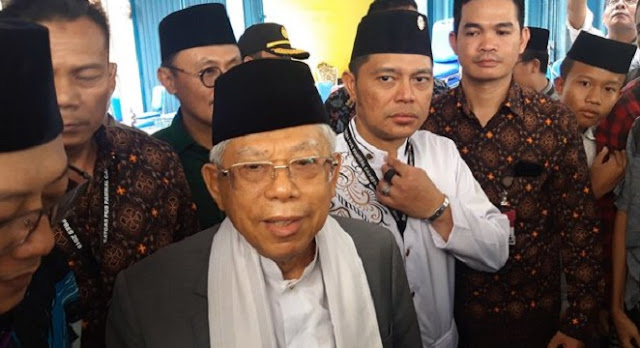 Suara Rakyat ■ KH Ma'ruf Amin requested that the Indonesian Ulema Council (MUI) hold a National Conference quickly so that he could immediately resign from his position as Chair of the MUI.

"Maybe the National Conference will be accelerated so that there will continue to be new leaders, because later I might no longer concurrently hold the chairman," said Ma'ruf at the Gatot Soebroto Army Central Hospital, Jakarta, Sunday (10/13/2019)).

Ma'ruf made this statement in response to pressure from a number of regions in the National Rakernas V in West Nusa Tenggara, 11-13 October 2019, to ask Ma'ruf to resign from his post after being appointed as Vice President of the Republic of Indonesia on 20 October 2019.

Substitution of new chairpersons can only be done at national conferences. Ma'ruf said he would follow the wishes of regional representatives who wanted him to resign.

"If the will is like that, then I will only run until it is finished," said Ma'ruf.

Previously, MUI Chairperson for Information and Communication, Masduki Baidowi, did not dismiss pressure from a number of regions on the 5th National Working Meeting in West Nusa Tenggara to ask MUI Chairperson KH Ma'ruf Amin to resign from his post after being appointed as Vice President of Indonesia on October 20 2019.

"There is indeed a push for KH Ma'ruf Amin to resign after being appointed as Vice President, but again it depends on the wishes of the region," he said in Mataram, Thursday night (10/10).

He explained, when referring to the term of office, KH Ma'ruf Amin could only place his position as Chairman of the MUI in 2020, but because KH Ma'ruf Amin would be appointed as Vice President, then the position of KH Ma'ruf Amin 'ruf Amin as MUI Chair can immediately resign.

"If we follow the rules of the organization, it can be resolved at the time of inauguration. We can later appoint an Acting Officer or something. But again it all depends on developments in the region because the point is that the MUI is a consensus agreement," explained Masduki Baidowi.

While the Rakernas as a forum under the National Conference will discuss the work program of the MUI going forward.

"The Central MUI agenda is not scheduled, but as a forum whose position and whereabouts under the National Conference can be discussed. But again it all depends on regional dynamics such as whether there are proposals from the regions and how we should discuss them," he said.